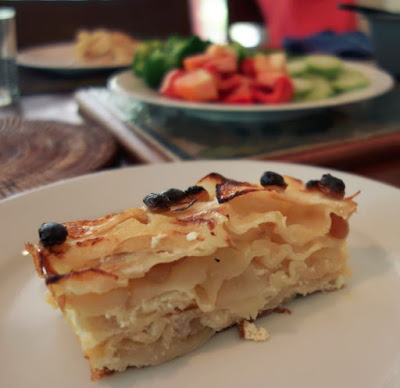 A useful and tasty alternative to other foods….

This lasagne layers three components – a whisk of egg, cream and milk; thin slices of apple (and sultanas if you like); and lasagne sheets straight from the box.

It’s simple, it’s quick, it’s (relatively) healthy and cheap, and the ingredients are probably already in your kitchen.

And so versatile. Our recipe doesn’t include sugar, so it’s an intriguing substitute for any other main course carb. In one of our favourite meals, the lasagne joins a good piece of pork and some crunchy steamed greens.

On the other hand, we’re just as likely to eat it for dessert, with vanilla ice-cream. 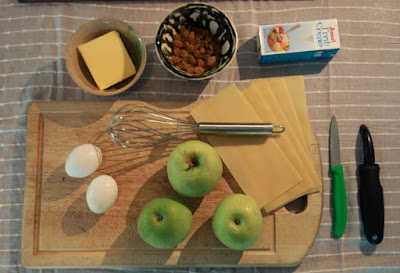 
2.   Whisk together the eggs, milk and cream


3.   Grease the bottom of a small baking dish


5.   Place a layer of apple on the mix and sprinkle with sultanas

6.   Cut some small nuggets of butter onto the apple


10. Top with the rest of the apple, scrape on any remaining mix, cut in some more butter 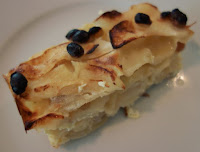 
13. Melt the remaining butter, and baste the top layer of apple


14. Return to the oven (without the foil) until the apple caramelises, 4 or 5 minutes


15. Remove from oven, allow a few minutes to cool, then cut and serve

- the milk, and to some extent the cream, provide moisture to the lasagne, so can be added to or reduced to suit
- when served, the lasagne should be firm enough that it stands on the plate, ready to be eaten with a knife and fork
- best not to put sultanas on the top layer of apple (even though they appear there in the image - sorry), as they are prone to burn

Posted by Aunt Escolástica at 10:07 PM