The sun, a bright circle on a grey background, can’t cast a shadow.

Air pollution so thick, worse than Beijing at its worst, worse than the South East Asian fires. You can’t see through it, but you can smell it, you can taste it, let it burn your throat, sting your eyes.

Smog season is here, the worst ever.

The week ending October 25, air pollution levels in Delhi were the lowest I've experienced – the PM2.5 AQI (air quality index) measure was below 50 on consecutive days. By global standards, anything below 50 is considered ‘good’ (ie. not going to do you any measurable harm).

On October 26, smog smothered Delhi. And stayed. Locked on and comfortable like a predator straddling a subdued prey.

Jeff Smith and a friend from NASA use satellite imagery to show how smoke from crop burning, in Punjab and areas to the northwest of Delhi, rolled over the city that day.

The crop smoke sent the AQI spinning up as high as 800 overnights, and kept it up around 500 for large parts of the day (dropping to around 200 some early afternoons). At levels above 300, health authorities advise against any kind of outside activity. It’s hard to see more than a few hundred metres. We’re wearing masks and still our eyes and throats hurt.

In a city the size of Delhi, the rolling thunder of tens of millions of fireworks is punctuated by the crack and fizz and light show of those nearer by. And the smoke spills, swirls, unfurls.

By one am, as the noise abated, measures of AQI reached 1500. Unbelievable, off-the-charts, too high for accurate readings, varying wildly between machines struggling with measurements beyond their range. The US embassy's machine measures above 999 but the embassy does not show these results, nor give credence to measures above 500.

The level dropped with daylight, but only into the high hundreds, before shooting up again, night after night, astonishingly high, an unprecedented order of magnitude.

Bizarrely, many Indians take pride in the pollution they create with their fireworks, as if this confirms their faith, their power, their pleasure. 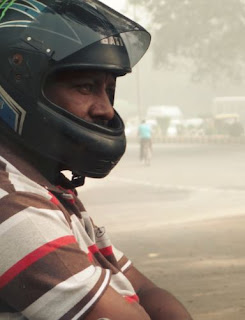 More than a week later, and levels remain astronomically high. According again to the US embassy meter, close to our home, levels are not dropping below 500 any time of the day, are mostly hovering around 800, and moving higher still in the dead of night. Another meter, Plume, which compares air pollution in cities around the world, and is typically more conservative, has taken to calling Delhi the ‘Airpocalypse’ and is reporting a daily average above 500.

Why is the smog so bad in Delhi? Apart from the crop fires and the firecrackers, Delhi’s air is already infiltrated with smog from under- and un-regulated trucks, buses and cars using inefficient fuels inefficiently, with smoke from garbage fires and heating, with smog from coal-fired power stations, industry and hundreds of small-scale brickworks.

Then multiply by adverse landform and climate conditions. Smog leaches into the city’s environs from surrounding areas, and remains. Delhi lies in the middle of a vast, flat plain, hundreds of kilometres wide, mountain ranges on most sides. Well over a thousand kilometres from either coast, Delhi rises only 200 metres above sea level. Smog has little incentive or avenue to dissipate.

At this time of year, with daily temperatures dropping towards winter, the cool air rolling off the Himalayas creates a temperature inversion trapping polluted air close to the ground, but not a wind that might blow that air away. Nor rain to flush the pollution from it.

***
Courts and governments belatedly issue short term responses to the Airpocalypse, from the sensible to the stupid, treating only the symptom but not the disease. A coal-fired power station adjacent to Delhi will close for a few days. A ban on construction work is largely ignored. Water is sprinkled and roadsides vacuumed to reduce dust in the air. Diesel generators may not be operated. Fires are banned. And children must stay home from school.

Environmental organisations say these measures are a step in the right direction, but insufficient.

And of course, it’s all short term, knee-jerk political reaction and blame-gaming. No serious suggestion to ban private fireworks or crop burning – the two triggers of the current crisis. Survivors of this crisis will get to watch another onslaught next year.

Even if bans were enacted, India’s institutions are probably incapable or uninterested in enforcing them. A swathe of existing legislation could be brought to bear on polluters, but is not.

The steamroller of public outrage, the kind of mass movement that motivates manipulative and Machiavellian politicians of the Indian ilk, has not and will not eventuate. And if not this year, when?

A year ago I wrote of the air emergency, and likened Indians to the clichéd frogs in a pan of water over the fire, unconcerned by gradually rising pollution. If this year, when the pollution hit boiling point overnight, they still don’t leap from the pot, then when?

***
Soon, the new pollution will be the new normal, bringing with it new levels of respiratory illnesses and cancers, a deadly season lining its wake with tens of thousands of corpses, and a generation of children with lungs worse than chainsmokers'. And the frog will continue to swim in circles. And short-termism will overrule long term cost and consequence.

***
At home, we have nine air filters running flat out. Under normal circumstances, the air intake for the central heating/AC captures about half the air pollution, and then the internal filters automatically soak up most of the rest. But when external pollution reaches a high enough level (about 500), those nine filters can no longer keep up with the flow – half the air pollution from outside is too much for our filtration system. At that point, we turn off the central fan and rely solely on the filters to bring levels down. The downside of this approach is that with the house sealed and people breathing, the amount of CO2 in the air rises (depending on how much breathing we’re doing) towards levels unhealthy enough to affect mental processes and sleep patterns. It’s a compromise either way, one we have no option but to manage. We can ‘choose our poison’.

In the car, I removed the car air filter I earlier installed and replaced it with a filter intended for a small room, adapted to run from the car’s 12V power.

In the last few weeks, we’ve spent $500 on an array of personal air filtration masks.

But until the air improves, drops into the 2-300 AQI range that suggests the air is merely ‘very unhealthy’ (as opposed to ‘hazardous’), outside activity is just not happening. No tennis, no football, no walks, no cups of tea on the verandah.

That’s us. For tens of millions of Indians, life goes on as normal, smog or no smog.

***
Meteorological experts are suggesting a change in the weather for Wednesday: the wind will pick up and dissipate the worst of the Airpocalypse. Leaving smog levels more typical of this time of year, oscillating between ‘unhealthy’ and ‘hazardous’. That's something to look forward to...

Posted by Aunt Escolástica at 8:58 AM