Upmarket and up the river in Coorg 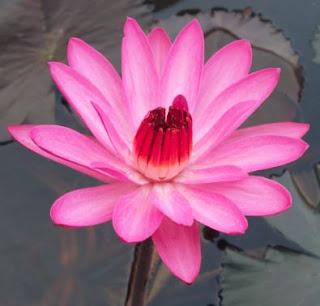 On an ‘eastern slope of the Western Gats’ only 80 kilometres from the Arabian Sea, the Orange County resort nestles snugly amongst the shade trees of an eponymous coffee plantation, straddling a picturesque gully falling to the Cauvery River.

Overhearing a family discussion about where to get out of the smog for the Thanksgiving long long weekend, a friend, owner of medical centres, insisted we visit a favourite resort. Dropping his name, he said, would assure us a large discount, and he and his family would join us, unless they did something else.

Nevertheless we went, to the Orange County resort in Coorg. And really, the big issue was the getting there and back, not the price. Travel time from Delhi to the resort, we could have taken a flight to central Europe, collected our luggage, and still had over an hour to reach a destination.

The Indian army won’t let our children into the terminal without ID. Children are not required to have ID. Perhaps the soldier at the entrance is intimidated by the thirteen year old standing over him.

Eventually a more senior officer determines that the children are not, after all, a security threat, and we’re permitted entry. Late now though. Well before we get near the front of the check-in queue we’re pulled to another shorter queue.

Luggage away, a second security queue, this one to check hand luggage and clothing. The soldiers processing passengers are pedantic, slow, and disinterested. That thousands of people are travelling is not their concern, only that procedure is followed, at a painstaking and callous pace.

Re-packing our carry-on, the flight’s already boarding. On the last bus, as it pulls away from the gate half-full, and amongst the last to board the plane before it taxies away bang on time.

Seats on GoAir India are packed. Perhaps twenty centimetres separates the front of one seat from the back of the next. And in my case, the seat in front is damaged and permanently reclined.

Apart from being wedged in for three hours, the flight’s good.

Outside Bangalore’s newish and well-maintained terminal, air feels almost as thick as Delhi’s, and the traffic is at least as bad. Fortunately, our route skips around the north and west of the city and we get but an hour-long taste of the congestion.

Bangalore (or Bengalaru) is the engine of India’s IT drive, and espouses a make-it-rich mentality. Near a Lamborghini workshop, a large billboard invites me to ‘Tycoon Gym’. In parts of the city, scores of trucks, filled with sand for building cement, queue on the sides of overcrowded roads, ready to rush to whichever high-rise project needs more material right now.

Onto an outer ring road and then heading west, the city falls away, billboard size retracts, and their subject matter changes, from the latest model phones, cars and … models, to Bollywood movies.

Movie bills are everywhere – on billboards, in bus stations, on the sides of buildings, on vehicles, on trees. Movie culture is quite the thing. In one small town, a poster of a movie star has been garlanded and decorated to celebrate his birthday. Almost every other product hawked on a sign (food, sandals, etc) is endorsed by some or other star.

The Deccan plateau, flat but made bountiful by the Cauvery River.

Between Bangalore and the Western Gats, another icon of modern India, its somewhat less glamorous diabetes industry. Obesity rates

amongst India’s male population leaped from 10% to over 50% in just six years 2005-11, and obesity amongst women today is significantly higher again. India’s self-proclaimed ‘sugar capital’, Mandya, and the hundreds of thousands of hectares of cane surrounding, drain the river to profit from India’s growing addiction to processed sugar.

Of course water drawn here is water not drawn downstream, trigger for constant political wrangling and occasional violence along an 800 kilometre eastward course, until the diminished river empties into the Bay of Bengal.

Eventually the billboards and the buildings fall away, exposing not just sugarcane, but the countryside more generally, and as the air too clears, starved of clear air for weeks, we lower the windows when we can, and suck it in.

We feed the kids pizza about halfway through the trip, at a roadside complex of franchise restaurants, western and Indian both. Speaking to the manager at Dominos, he reveals how much he is paid – insufficient to afford one pizza a day from the restaurant he manages.

Five hours on the road and the land starts to rise, the trees close in and the horticulture falls away. We roll to a brief stop at a checkpoint intended to discourage the plunder of timber from the forests blanketing hills and ridges. Now the air is properly clear, and crisp. Now the traffic is occasional. Now the branches move closer to the car, and the leaves reach out to touch us. It’s good. We turn off, again and again, leaving the highway to bump down the last rough kilometre of local road to the resort. 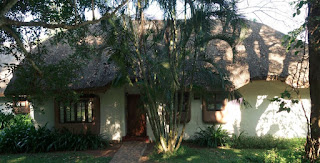 Going through the gate, it’s like passing into another world. Suddenly, we’re in the lap of luxury, we’re pampered, our every need, every wish, is addressed. The food is good, the drinks are good, the service is good, the surroundings are beautiful, our accommodation is ideal. Space, sound, nature, life, time – all these things, delivered on a plate, or a golf buggy. Ask and you shall receive. From any one of the many staff standing by, day and night.

It all seems a bit unreal, but here, in the land far, far away, nothing to do but give into the fantastic. 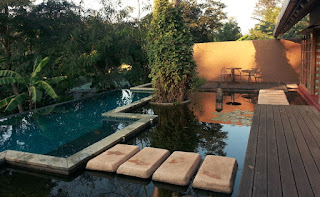 The property has belonged to the same family since the 1920s, and the older buildings display a colonial style. Many of the staff are second and third generation plantation workers. The resort opened in 1984, and today 63 cottages that would be incongruous in Hobbiton only for the height of their doors cluster in groups, each house with its own small private ponds, pool, garden.

Down the centre of the gully run small lakes, ponds (and a fish farm where guests can catch a fish in minutes) and rice fields, and along their edges market gardens. Fruit trees dot the grassy slopes, interspersed with tropical and rainforest flora. And enveloping all, the green of the plantation shade trees, coffee bushes and pepper vines. 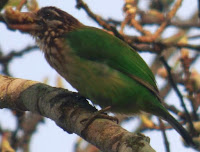 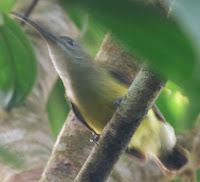 With a wetland in the centre, the plantation around, and the national park which abuts, birdlife is abundant. One early morning, we head out with a local and spot more than thirty breeds in less than an hour – kingfishers, hornbills, woodpeckers, spider-eaters, honey-eaters, parrots, parakeets, herons, cranes, mynahs, eagles – I cannot pretend to name or know them all. Nor can I deny the constant delight ignited by the flashes of colour, the bursts of noise and sudden movement, the emergence from the shadows of yet another group of active flighty beings.

Another morning, another guide, another walk, the length of the plantation, and into the Dubare Reserve Forest. This reserve is closed to the public for all but two hours of each day, and even then only in the company of an approved guide. A very different ethos than at most Indian parks we’ve visited.

Again, the profusion of life, particularly birdlife, is astounding. This forest, too, is home to all kinds of animals, and though we don’t see them, evidence of mega-fauna abounds. Wild elephant droppings on the paths and scrapings on the trees. The elephants invade the plantation, searching for fruity treats, breadfruit especially. After decades of trying to keep them out – digging enormous trenches, electrifying fences –  the plantation today has bowed to the will of the elephant and simply does its best to guide it (or them) towards the object of its desire and away from doing damage to the plantation.

The absence of old growth in the forest suggests to me it was clear felled, less a century ago. And recent events – a bamboo pollination that preceded a large-scale die-off of many tall bamboo stands, and a forest fire that cleared out much of the more established undergrowth – have left the forest floor relatively open, bar the weeds and small growth that scratch and stick. 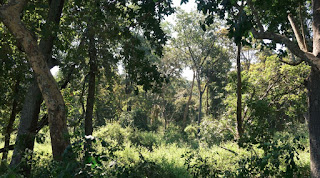 The forest is evocative of the Jungle Book, even though when he wrote his book Kipling lived far north from here, in Madhya Pradesh (see 'Four Days ....'). We clamber amongst the vines and through the undergrowth choking storm channels, and eventually emerge to a near perfect panorama of the Cauvery River.

Across the river, a ‘man village’, just visible through the trees, a settlement of ‘tribal people’ – indigenous forest dwellers – being incorporated into the modern Indian state.

Awakening on our third morning in this paradisiacal bubble, after an amply serviced and tasty breakfast we’re cast down, off early en route for Delhi. It’s wedding season, and we have a long way to travel, and faced with the possibility of roads clogged by weddings or other circumstance, we need to leave with time in hand.

Back down through the forest, onto the plateau. Back past the canefields, through the villages with their movie bills. We get held up a little by wedding stragglers, crowded into tuktuks, trucks and cars, and on motorcycles and scooters, but not for long.

The exteriors of the reception halls are alternately stuffed with cars, or over-crowded with motorcycles, as in ‘I’m going to a wedding’ – ‘Oh, is it a car wedding or a motorcycle wedding?’

Whichever they are, we get through wedding country before the ceremonies conclude and their participants emerge joyous and intent on clogging up the small towns’ roads, the most crowded, narrow points on the highway, with their reverie. We speed on.

Towards Bangalore, where the billboards stand taller than buildings, and the sand trucks stand by, even on a Sunday afternoon. Where the metro lines and bypass roads stop jagged and abrupt, forty metres up mid-air, delineating the temporary extremity of the metropolis. Skirting again through an hour of periphery traffic snarl, we arrive early at the airport, where, unlike Delhi, the soldiers at security are discrete, sharply dressed, efficient, polite and helpful. Our flight, inevitable given our early arrival, will depart late. As fate would have it, we chance upon a friendly political analyst and spend the interim in the bar, while the kids catch up on the wifi they’ve been without these last few days.

Home, an hour or so late – rough on the kids who have school in the morning.

Were there a way to Coorg that didn’t demand strenuous and holiday-consuming travel, even five or six hours, I’d recommend this getaway. The locale is ideal, beautiful, an incredible relief from life in Delhi. The service from the resort unforgettable – who returns to their cottage late afternoon, to find waiting a bottle of wine, a bed decorated with flowers, and a hot bath filled with oils, bubbles, and strewn, again, with flower petals? Must have been my birthday. And we barely touched on the delights and attractions the district has to offer, beyond the plantation.

Posted by Aunt Escolástica at 1:32 PM