Gotland is the largest island in the Baltic Sea, more or less in its middle, but closer to Sweden than Latvia. Profit from its rich agricultural land was the disputed prize in a long and hard fought medieval contest between the Hanseatic League’s German traders in the largest settlement of Visby, and the traditional owners and farmers of the land, who preferred to manage their own trade.

Today, the island maintains its agricultural base, though technological changes mean many of its old farmhouses now serve as summer homes for the wealthy of Stockholm, four hours ferry ride away. Apart from its agriculture and natural beauty, the island is also famous for medieval churches, all 98 of very similar design, construction and size (cathedralesque), originally catholic now protestant and generally vacant. The one I visited included a mermaid amongst its 12th century religious iconography, and a dove of peace that looked a lot like a seagull.

Gotland’s beaches are thick with fossils, thrown up after the end of the last ice age, as the weight of the ice on top of the earth was lifted, and the land itself unburdened began, as it continues, to rise. The island’s geological base is sedimentary limestone, thick with the detritus of shallow-water life of some 400 million years past.

As recently as 12,000 years ago, the retreat of the ice heralded the emergence of what is known today as Stora Karlsoe, one of many small islands to breach the surface of the Baltic at about that same time. The island, together with another even smaller island, Lille Karlsoe, lies just a few kilometres off the western coast of Gotland, and can be reached by ferry from Klintehamn.

The oldest known human structure in all of Scandinavia, an early bronze age burial cairn, sits unattended and unprotected in a sheep field on the island’s south. However, other evidence suggests the island was first inhabited by cave dwellers as much as ten thousand years ago, though the first wave of troglodytes abandoned it and it lay uninhabited for almost three thousand years. In historical times, sheep graziers gradually moved out of the caves and built more comfortable accommodations, though it’s never really been much of a ‘family’ location: the only families to set up there permanently being those of the men operating the 19th century lighthouse.

In the eighteenth century, the island came to the attention of the great Swedish biologist Linneaus, who discovered a previously unknown kind of cabbage there during a two day trip to Stora then Lille Karlsoe, where he was even more excited to categorise a new breed of sheep, unique to that tiny island.

In the nineteenth century, a German sheep farmer convinced the king of Sweden no less to turn the island into a nature reserve, making it the second oldest such park in the world. A strange sort of nature reserve – for a long time it also served simultaneously as a hunting lodge for the king, and even today, sheep continue to run on the island.

While the island’s flora, not just inedible cabbages, but other more flowery forms, including orchids, even black ones, continue to fascinate biologists, today it’s the island’s bird life that attracts the most attention. It’s a sanctuary for many different breeds. 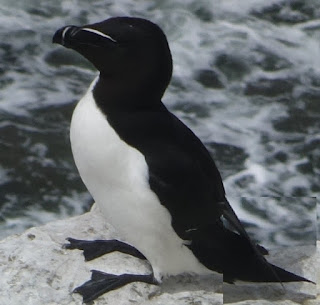 One particularly interesting summertime inhabitant of the island’s cliffs and waters is a sub-breed of the Razorbill (alca torda), named the alca torda torda by Linnaeus himself, back in 1758. Linnaeus drew the faux-latin appellation from its name in the local dialect, the tordmule, which he may or may not have realised translates literally as ‘turd beak’ – after the pattern on the bird’s beak. 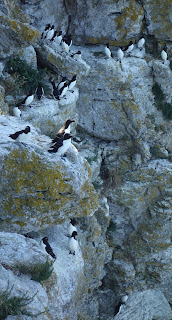 The big difference, of course, is that it can fly, though it doesn’t give the impression of being a confident flyer, flapping its wings like mad just to stay in the air, and often fluffing attempts to land on the narrow ledges where it roosts and makes nests. According to the experts, it can fly as much as 15km at a stretch, and may even fly a hundred kilometres in search of food. Can’t argue with the experts, but the ones I saw weren’t flying much more than a few hundred metres. The birds spend almost their whole year in the water – outdoing penguins who tend to go out for the day only – and only make landfall for the few weeks of the breeding cycle.

It’s the females who negotiate a small patch of rock on which to lay an egg. The breeding pair then take turns to look after the egg and the chick. Then in about July each year, when the chicks are only a few weeks old, not even a quarter of the size of their parents, the male parent flies to the base of the cliff and calls the young one down. The chicks jump off the cliff and flap their wings like mad – they can’t fly – until they crash into the rocks below. I’m told 97%, even more, survive their first (and last) flight from the nest. Once on the rocks, they waddle over to the water with their fathers, then set off swimming, south, towards Poland, some 300 kilometres away. How long before they next attempt to fly, I don’t know, but they’ve lots of time to practice, safely, underwater.

Their mothers remain behind for a few weeks, before they too set off for the warmer waters off the Polish coast.

You can stay overnight on the island, in the old lighthouse or in the old lighthouse-keepers’ residences, or in the lodge built for the king and queen, and take a guided tour that will reveal the island’s geology, its orchids, the historical cairns and quarries, the bird cliffs. You can eat in a very nice, and very expensive little restaurant, or cook in the shared kitchen. And after the ferry takes the last of the day-trippers away, you can walk in areas off the official tour routes, visit the old caves filled with bones, chew your way through fields of wild strawberries, swim in the slightly above freezing water, and collect the most amazing fossils (though you can’t take them away). You can even, if you time it right, help the naturalists to tag the young tordmules as they waddle over the rocks, making their break for Poland and a chance at life as a proto-penguin. 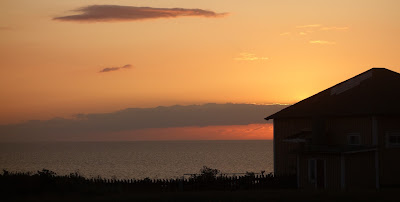 If you’re anything like me, kicking back, enjoying the ambience of the reserve, you’ll find yourself wondering how many more generations it will be before one of those tordmule chicks looks off the ledge and thinks ‘You know what, I’ll just walk’, wondering why the waters aren’t filled with tordmule-chick-feasting seals and otters, and wondering where the next closest field of wild strawberries is.

(caveats: I took all the pix on a little pocket camera, not really the thing for birdspotting, and there's a lot of pix in this post - so if the layout looks different in your browser - it looks almost right in mine now - sorry about that.)

Posted by Aunt Escolástica at 2:12 PM