Fleeing his native Tibet and its invasion by Chinese forces, in the 1950’s the young Dalai Lama and his entourage set up camp in the hills above Dharamasala, adjacent to MacLeodganj. It’s still base camp for the Tibetan leader, and his ongoing presence has wrought Dalai Lama Inc. into being.

Once another stop on the hippie trail, today MacLeodganj possesses all the typical attributes of rampant third world un-planned over-development. The familiar smell of sewerage, the vermin, the piles of garbage, the in-your-face sales techniques from salesmen just working for the ‘man’ with no historical link to the site, the traffic that gets a little bit too close to everything, gets blocked anytime anyone stops. The kind of stuff that tourist guides describe as the ‘overpowering sensual experience of modern India, its bright mixture of colours and smells, its vibrant crowds, the sounds of the marketplace’.

The place is not without its redeeming features though – it’s off the indo-gangetic plain. It’s a delight to watch the way the children who are growing up here negotiate the steps, the endless ups and downs, as if a human were designed to spend most of its time going up or down. To get to our hotel room from a point on the street, itself quite a downhill from the town square, required taking one hundred large, rough and uneven steps down a pathway to the hotel entrance, then another 50 back up inside the hotel to our floor.

The air here is relatively clear, a joy for the eyes and the chest.

And the presence of a large and devoted Tibetan Buddhist community has its merits as well, an ambience of shared wellmeaningness or something. The large sign saying ‘Kindness is my religion’ perhaps my favourite amongst the many of the Lama’s utterances posted about the place. Though ‘before saying anything bad about another person, try imagining your mouth is full of excrement’, a much smaller sign for a much longer saying, also held a special appeal for me.

Tibetan Buddhism is pretty modest as religious movements go. The Lama’s temple is a small building, inside a much larger complex, built to deal with much larger crowds. However, there’s little pompous about it, and the overwhelming mood seems to be that you find your own relationship with the place, rather than move within strictly defined routes and categories. All kinds of devotees rock up in town, monks from all over the world, amid other less institutionalised followers of Buddhism.

The strong presence of the Tibetan refugee community too is a kind of pleasure. We visited a well-run wellspring school, where children from all over the Tibetan diaspora board together in large houses, study in Tibetan while earning awards in the Indian education system, and keep their culture young, vibrant and united.

And of course, rising up behind the town are the mountains. 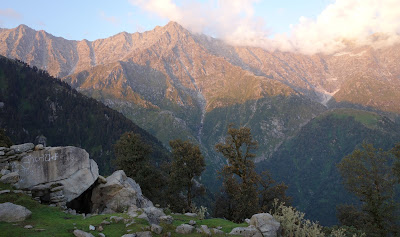 We took a day and a half, one day climbing, half day descending, and camped up on a ridge high above the town, at an altitude similar to Australia’s Mt Kosciusko.

We had to share the pathways and the ridge with hundreds of other ‘trekkers’, who made their presence felt at the campsite with the smell of ganja and late night laughter, and a herd of cows that mostly made its presence felt by shitting everywhere.

I checked five different weather forecasts before we left. Three said sunshine, one said showers, one said a few quick storms. The last one was right, though we were fortunate enough to be close to one of the many stores along the trail both times the skies broke open – we drank a lot of ‘chai’!

As the sun went down, the temperature dropped, and we hadn’t really prepared for the cold, so had little option but to dive into our tents and sleeping bags, and play cards or read books until we fell asleep.

Cow shit and out-of-it-Indian Gen Y’s aside, the trek was well organised. Our guide took his job seriously, shepherding the boys away from dangerous edges, getting us sheltered and fed, and responding to our various wishes, and at the same time showing us some of the highlights as we walked. 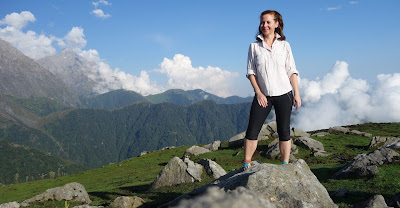 As we were heading back down the hill, a few, more serious trekkers were heading deeper into the mountains, for treks that might last several days, or weeks, likely to take them away from the party-goers, perhaps the cows as well. While they got to enjoy that, I was enjoying and increasingly mystified by a seemingly endless cavalcade of attractive young women making its way up the hill. The mystery unravelled when we stopped to talk to one of the girls, from a fashion institute that was taking a class up the hill for a shoot. Wonderful morning for it, though the heavens opened again in the afternoon.

Doing little to undermine my conviction that easy to get to and pleasurable weekends away from Delhi are few in number, we also encountered several staff from the boys’ school, also taking advantage of the long weekend, trekking up the mountain with family and friends, intending to do in a day what we did in a day and a half.

Back in town, monks everywhere. The ‘second Saturday’ of the month is the weekend when the monks, and schoolkids too, get an extra half day off. To top that off, the big monk, the head of DL Inc. had taken the motorcade out of town that very morning, further encouraging all to exit their mouseholes, abandon their devotions, and pursue more earthly pleasures.


Our boys added to the festive mood by taking a taxi load of pizzas back up to the Tibetan community village school, to the boarding house of a pen-pal, one of the 36 young and organised Tibetan students boarding there, all more than ready to enjoy a treat. 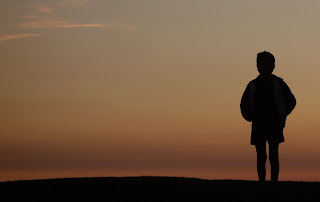 Posted by Aunt Escolástica at 12:00 AM