The Luck of Politics - Andrew Leigh


(This review originally appeared in 'The Economic Record')

Andrew Leigh makes a political statement in ‘The Luck of Politics’: that politicians on the right of the political spectrum tend to credit themselves or their Gods for political success, while politicians on the left (like Leigh) acknowledge the role of luck in life and therefore have more sympathy for those who’ve failed to ‘make their own luck,’ who’ve basked less often in the ‘grace of God’: 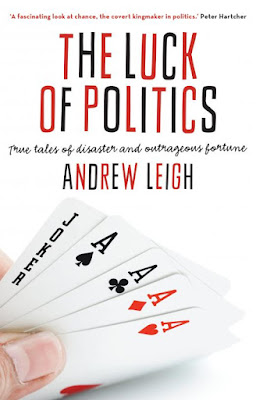 ‘Those who enjoy success aren’t superior beings – they’re fortunate souls, with an obligation to look after those who didn’t receive the same opportunities. Because I’m an egalitarian, I believe in luck. And because I believe in luck, I regard excessive inequality as fundamentally unfair ….

…. My belief in luck is a major reason why I support a targeted social safety net, which directs more resources towards the most disadvantaged.”
It’s a fair call, a good call, but like other substantial issues raised in the book, it’s glossed over in the interest of delivering an easy read.

‘The Luck of Politics’ is entertaining, interesting. A book you can keep lying around, and pick up in your spare minutes.

But it’s not a substantial work. The central claim of the blurb, that it’s going to ‘remake your basic understanding of politics’ by revealing the role of ‘luck’, is overblown. ‘Luck’ is too vague a term, and why assume that readers don’t already consider it.

Leigh sets up the concept that politics is more like poker than chess, and returns to the analogy frequently. After laying his cornerstone though, he neglects to interrogate poker for the insights it has to offer his investigation.

To illustrate that the predictive powers of mainstream political pundits are often little if any better than the toss of a coin, the role of a dice, he cherry-picks from the work of Nate Silver. In doing so he overlooks Silver’s own phenomenal success in predicting political outcomes (which led to Silver's listing amongst Time Magazine’s ‘100 Most Influential People’).

Leigh should have been alert to the insights that Silver, who also spent years playing poker for a living, has to offer his analogy.

Leigh never clarifies how his idea of luck works in real life. Does luck flap the political butterfly’s wings, and set off a chain of events ultimately unleashing a tornado that remakes the political landscape? (And how many butterflies are there?) Does luck fall like drops (or buckets) of water onto a political surface, or land like a black swan, setting off ripples, waves, even tsunamis, but eventually returning to equilibrium? (And what of those living on the pond’s edge?)

Leigh’s highlighting of the dangers of ‘hyperpartisanship’ (that luck matters enormously when electoral support for widely divergent political positions is evenly split) suggests he’s a butterfly man, but he never makes the case explicitly, never backs it up.

Silver, for poker if nothing else, enumerates the effects of luck on outcomes. In his best known work, ‘The Signal and the Noise’, he asserts (with 95% certainty) that a very good poker player, after 60,000 hands of a popular variant of the game, bet in $100 or $200 increments, would be somewhere between $0 and $400,000 in front. That’s luck laid plain if it ever was.

How then to best model luck in the poker game of politics? Butterflies mostly sit on twigs, resting their wings, as rain falls intermittently, in torrents, or not at all, on the pond and off a swan’s back. I’d like to know.

The US Government makes no secret of spending hundreds of millions of dollars developing models to predict political events around the world. All include a ‘margin for error’ – luck. Presumably, those models work on the Australian polity as well. Other stakeholders use modelling to assist in the prediction (and manipulation) of political outcomes.

As an outstanding economist with a brilliant mind, close to the heart of the Australian Labor Party, Leigh is perfectly placed to illuminate the modelling modern Australian political parties do, the margins for error that they work with, the effect these models have on the decisions parties make in their efforts to control outcomes, and how they account for luck. While the book regales us with easy-to-chew examples from the past, it keeps today’s complex diet off the menu.

Leigh ( the Federal Member of Parliament for Fenner in the Australian Capital Territory) leans heavily on the ‘luckiness’ of a candidate’s name with respect to individual voting decisions, but reveals little of  contemporary experience with this phenomenon. Were he to shine a light on the workings of the ACT Greens and the decision to replace their 2013 federal election candidate for the ACT Senate, Simon Sheikh, with Christina Hobbs in 2016, I’d be hooked. Given the narrowness of the Liberals win over the Greens in 2013, Leigh's interest in having the Liberals lose their Senate spot in the ACT, and his assertions that a middle-eastern name reduces electoral support by 2.3% and that being one of the more attractive candidates is worth a 1-2% boost, did Leigh in fact counsel the Greens to dump Sheikh? In the end, the Liberals held onto the second Senate spot in the ACT in 2016, again by the narrowest of margins. 'Luck' on this occasion was not enough.
Posted by Aunt Escolástica at 6:10 PM