Four days in Madhya Pradesh without a tennis court

Orchha is a ‘tier two’ tourist attraction. It’s not the Taj Mahal, or even Varanasi, but has historical attractions – two old palaces, numerous temples and cenotaphs – and it’s a small town in the countryside, close to a convenient rail junction.

At the northern base of the Vindhyas mountain range, where the Betwa river fattens out as it spills onto the Indo-Gangetic plain, Orchha sits opposite an island mid-river, twenty kilometres long and as much as two kilometres wide, officially a wildlife sanctuary. The undulating terrain, the forests and the gushing river have made the region a tourist destination since at least the fifteenth century.


So we took the early morning train to nearby Jhansi, planning for three nights away, since I hadn’t been able to secure seats back on the Sunday night train.

Of the hotels in and around Orchha, one claimed to have a tennis court, and splendid river views (it was located on the river). The rooms looked fantastic.

It failed to live up to expectations. Our chief negotiator (who, even though she accurately foretold days in advance the absence of tennis court, failed to predict the very large WALL that meant no river view either) got busy relocating us to somewhat better aired rooms than we’d been allocated – and good she did. A tour group arrived not long after us, triggering a chaotic scramble to ‘upgrade’ their accommodation.

And on our second day in Orchha, we resolved to move to another hotel, driven there, not by the promise of a tennis court, but of a hotel at which we could relax and enjoy ourselves.

The Amar Mahal is built in the style of a palace, but is actually only a decade old. Large well-lit rooms, stylish décor, beautiful gardens, attentive staff, reasonable food, and a few annoying idiosyncrasies, it’s a reasonable weekend getaway option from Delhi. Bring your own ping-pong paddles and balls.

Orchha is small enough to explore on foot – in itself a welcome relief from Delhi.

Adjacent to our hotel, a series of cenotaphs parallel to the river, in their upper reaches home to a large colony of vultures not one of which would spread its wings while I stood with camera poised.

Below the cenotaph, upstream, ghats for incinerating the dead, and downstream, access to the river for all manner of ceremony and worship. Our visit coincided with a Ganesh festival, so elephant-headed effigies, colour and crowds abound, polluting the river with their holiness. 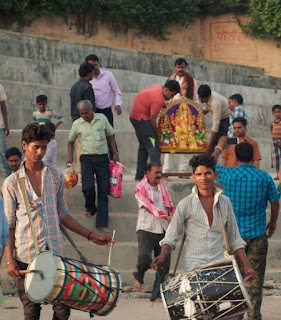 strong, but at the edges, it could get pretty rank, used as laundry, bathroom, garbage dump. I was mystified, as were locals, by the appearance in one of the eddies, of the headgear of an entire marching band. Had a sudden gust of wind doffed the lot of them as they crossed a bridge upstream? Strange days.

On the banks of the river, amongst the celebrants, thin bedraggled women sift through the sand and the garbage, hunting coins, worth a few cents each, flung into the waters to honour the gods.

The Rajputs ruled over much of northern India from the 7th century on, and by the 15th century Rajput nobles were regularly enjoying the natural beauty of Orchha. By the 17th century, they had a permanent presence. By then subservient to and allied with the Mughal invaders, they built another larger palace, for the pleasure of the Mughal overlord, should he deign to drop in.

The two palaces seem to merge into one. The designs are typical, with reception areas tiered for petitioners of different caste, screened areas from which the rulers’ women could look out but not be seen, inner and outer courtyards, cool rooms. The second, larger, palace, has a swimming pool (and wading pool for the kids) in the central inner courtyard. Decorated in a style dubbed‘hindo-islamic’, a response to islam’s dislike of figurative art, in places it takes the geometric patterns of Islamic art and turns them into figures. In others it stylises figures.

And out the back, a smaller but still enormous rumpus palace for the kids. 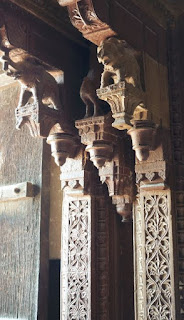 Today, the palaces are all but bare, with only some of the intricate internal paintwork still visible. Evidence of external blue paintwork is all but gone. And with only a small museum, little more than a gallery, it’s hard to get into the history of the site.


The palaces have an ideal location, accessible by a bridge, on a piece of ground between two river channels, rising well above marshy surrounds, a moat during the wet.

We met Gorav on the bridge. A regular little scammer, whose stories doubtless all contained a kernel of truth. So stick ‘alleged’ in front of anything sourced to Gorav. At 16, he is the envy of the other boys in the village because he speaks English so much better than them. He claims to speak several languages, but confused Hebrew with French. Gorav had to leave school at the seventh class (though he passed the tenth class exams) and move to Delhi to live on the street four years with his family, including a sister who was born during this period, while his father pursued a job. His father, working as a driver in Mumbai, killed himself while driving drunk, and destroyed Gorav’s smartphone at the same time, one given him seven years ago by an Australian woman. They had to sell their house and car and return to Orchha, where he's now back at a private school that costs twice the price of a middle class private school in Delhi, and where his family's rent is coincidentally the same amount. The more he talked, the less I liked him. He wasn’t hearing me at all, just raving on with stories deigned to elicit sympathy. Refusing an offer of cash for having shown us around, he dragged us back to mother’s stall, where we were entreated by mother and sister to buy mass-produced trinkets for many many times their value. We were warned that all the other vendors were crooks.
Gorav’s mother had the look of someone made hard by life. Her eyes like a bird of prey, her smile without empathy. The boy is smart, engaging, but his mind is running on false ideas, doing his best to be the man of the family. The two year old playing in the dirt at their feet.

The best intentions surely underwrote the creation of a nature reserve mid-stream. The two bridges to the island, one on either side, partially dismantled to prevent crossing with a motor vehicle. And an entrance fee for the park – about 50c, a significant disincentive for most Indians. But this is India. Rocks and pieces of broken concrete cobbled together  make it barely possible to get a motorbike across without carrying it. And once across, the riders roar past the entrance, and use the island as a short cut to a village on the other side of the delta.

We rented bicycles , for more than they were worth (about $2 each) from the park ranger, who then gave us a significant discount on the park entry fee – he didn’t charge us. We headed off into the forest, the five of us on four bikes, with the two smaller humans taking turns to sit on the back of my bike or run (often walk, the bikes were really bad) behind (or, yeah, in front). We had a lot of fun, wobbling along, and crossed the second bridge to climb a feudal era tower overlooking the domain. 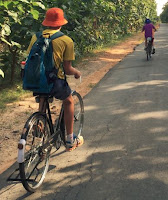 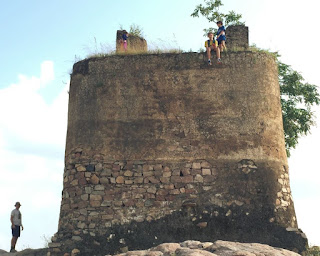 Oh the cows! The nature reserve was a cow reserve, forget the signs saying ‘here lies the spotted deer’ or whatever. Cows everywhere, hundreds of them. Large parts of the nature reserve seemed to be cleared as grazing land.

Rural India, the cows go wherever they want. They do that pretty much in the towns too, rifling through piles of garbage, lying down in the middle of busy intersections, ambling across multi-lane conduits. And they just shit everywhere.

Because of all the religious sanctions on cows, few people are actually prepared to take responsibility for them. Especially for the wandering street cows. Cow protection societies tend to attack humans for contravening the many religious sanctions relating to cows – humans from other religious groups or castes typically - rather than actually focus on the welfare of cows.


Hence the proliferation of cows on the island, somewhere they could be driven and not return from of their own volition. 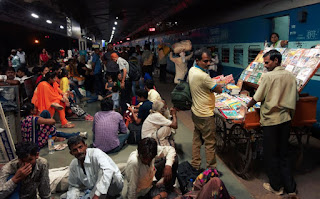 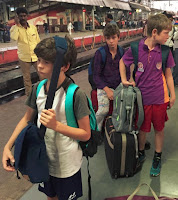 After a couple of laid back days at the Amar Mahal, we headed for home. On the platform with 20 minutes to spare, the bad news: the train is going to be late. A half hour later, we’re told it’s running 90 minutes late. Ultimately, we pull out of Jhansi junction exactly 2 hours behind schedule. The trip home comfortable enough, but the delay messed us up badly – next morning was a school day for the kids, who didn’t even get to bed till 2am. And by the time I’d tidied up and prepped for the morning, I was pretty ill. An unfortunate end to an otherwise pleasant break.

Posted by Aunt Escolástica at 1:03 AM