A bit of space (right here on Earth)

Delhi is a massive, busy crowded city. Life tumbles out onto the streets surrounding the slums, traffic tips out of lanes into oncoming traffic and onto footpaths anywhere it can. Moving through a market means combining skills honed in video games with maze-running to generate a pattern of movement often more lateral and medial than centrifugal. Everything crowds in for space – walls, doors, cables, gutters, goods and services, temples, even the sky pushes its way in from time to time.

And yet, Delhi is also home to a surprising number of open, near vacant spaces. Large parts of the diplomatic enclave, for example, are fields of grass lining wide avenues dividing the various representative compounds. And while people lounge on the grass, occasionally organise games, their presence remains relatively sparse.

Public parks, even at peak times on the weekends, are not that much busier than parks in Australian metropoles might be.

And the population of the outside areas around New Delhi’s parliamentary district is kept strictly under control by policemen armed with big sticks – though numbers can surge at this popular spot for public protest, at times reaching into the hundreds of thousands.

Delhi is host to a number of ‘old cities’, seven, or nine, even more, depending on who you are talking to or how you define them. Delhi has been a major population centre for well over a thousand years. At different times, its different rulers have built at different sites their own different ‘cities’ – generally walled areas containing places of worship, meeting places, gardens, and residences for the mighty.

While some of these sites are popular and well maintained (like the Qutb Minar site, overrun by visiting school groups by 11 on most days), others are largely overlooked.

The Feroz Shah Kotla Fort, for example, despite being part of India’s archaeological survey, is largely forgotten, with the five rupee (ten cent) entry fee serving to do little more than keep the homeless out.
Feroz Shah, described in the history books as a kind and bloodthirsty man, built the fort for his city Ferozabad, on the banks of the Yamuna river (the great ruler didn’t get to name the river after himself). Ultimately, it fell into disuse, and pretty much everyone moved away. Even the river moved away – today its course runs almost a kilometre away from the side of the city it once bordered (though you can still smell it).

Today, the walls of the old city serve to keep the incessant city noise out – climb to the top of the building from which Ashok’s pillar rises, for example, and you can hear (and barely see) the city and its traffic again – the concrete foundations of a bridge over the Yamuna climb away from the site, and highways now run where the ancient river coursed. Climb down again, and the noise recedes.

Inside, the lawns, the ruins, rest in stillness with only a subdued city hum in the aural distance. It’s worth a look, if you’re hanging around Delhi looking for something to do. Finding it though, can be fraught – the nearby stadium of the same name (how pleased he’d be though, that a sports stadium was named after him, a thousand years later) is almost invariably I’m told where drivers will take you if you ask to go to Ferozobad – so bring your own map.

Inside, amongst the ruins, you’ll find the aforementioned Ashok’s pillar – there are a few of these spread around India. Ashok, the greatest ruler of India’s ‘Golden Age’, living approx. 300BC, became, after a particularly bloody battle in which his acolytes allege his armies slew no fffewer than a 100,000 (conveniently, in Hindi, the number for a hundred thousand is a lakh) of his enemies, anyway, he became a pacifist of all things, and in pursuing his newfound love of peace, erected pillars around the empire that codified his moral compass, for all to interpret.

Feroza Shah seems to have been fascinated by them – 1500 years later, he re-located at least two of them to Delhi. The one at Ferozabad, one of the better ones.

You’ll find a stepwell. India’s famous stepwells are, well, wells, but ones that you can walk down to. As the water table sinks (and in different places, it sinks to different levels, in some places I’ve seen varying by as much as 70m over the course of a year, as the level of monsoon waters in the groundwater table ebbs and flows. Most stepwells are rectangular, with rooms carved into the walls at each floor on the way down. At Neemrana, not far from the desert, we walked 100m down one.

Ferozabad’s stepwell is near unique – it’s a circular one. It was closed when I visited (with a very nice group of women who congregate each Wednesday at a different Delhi historical site and take turns to lead each other on a tour – the photo of the old mosque at the fort, below, was taken by one of them, credit due) because last year, some tormented young man had ended his life by throwing himself in – clearly the water table had fallen almost as far as he did. Had he thrown himself off a bridge, would they have closed that? Anyway.

And there’s the old mosque, Feroz Shah’s old mosque, the mosque next to his house. It’s still a functioning mosque, but Thursday is the big day, not Friday. Friday or any other day, you’ll be unlikely to find more than one or two folk hanging around, and they’re a bit curious, those folk.

Despite its original purpose, and current status, as a mosque, over the centuries, the site has been credited with magical powers, and ‘djinns’ – or genies as in ‘I dream of’ genies – who probably arrived from the Middle East the same time as Islam, are said to inhabit the many small rooms underneath the mosque, originally intended to provide temporary accommodation for traders visiting Ferozabad.

And locals (‘dilliwallahs’) will take their hopes and wishes there, sometimes in their minds, sometimes written on a piece of paper, and affix them to a wall in some room or egress under the mosque, in a plea for supernatural support in the pursuit of their ambition. At the same time, making a small offering, flowers or incense.

I didn’t see any djinns down there, just a few small bats, and a couple of laid back security guards. 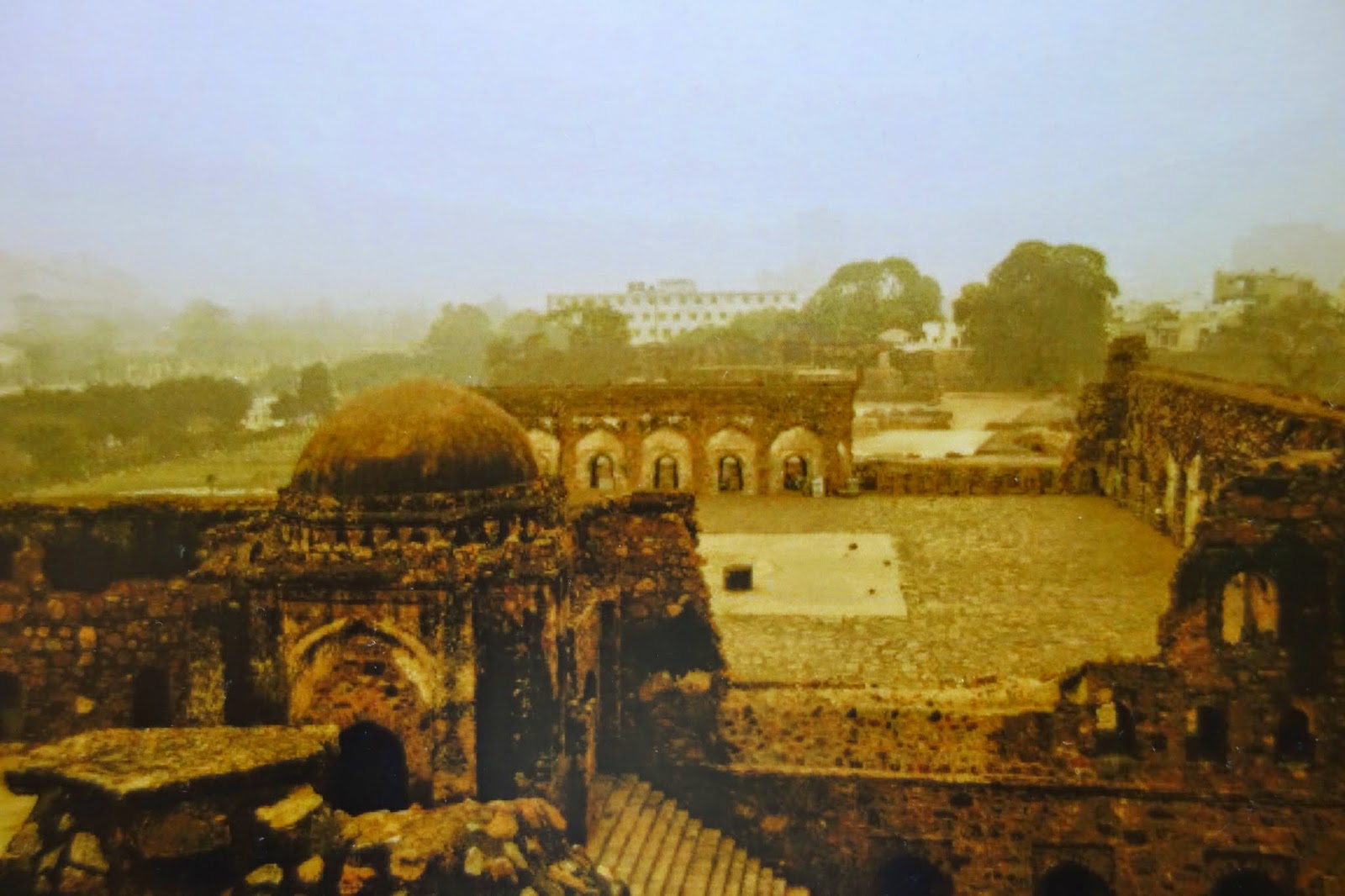 Because of its largely uninhabited, open, and relatively pleasant surrounds, the most important social purpose served by Ferozabad today is as a place for young couples to slip away, and do whatever it is that young couples do.

Disappearing into the smog - there's a massive city in that grey haze, you just can't see it. For more on Delhi's smog, try Stephanie March's story from last week.

This morning, for the first time since we arrived, the smog had thinned, as it does at the end of winter.
Posted by Aunt Escolástica at 11:33 AM